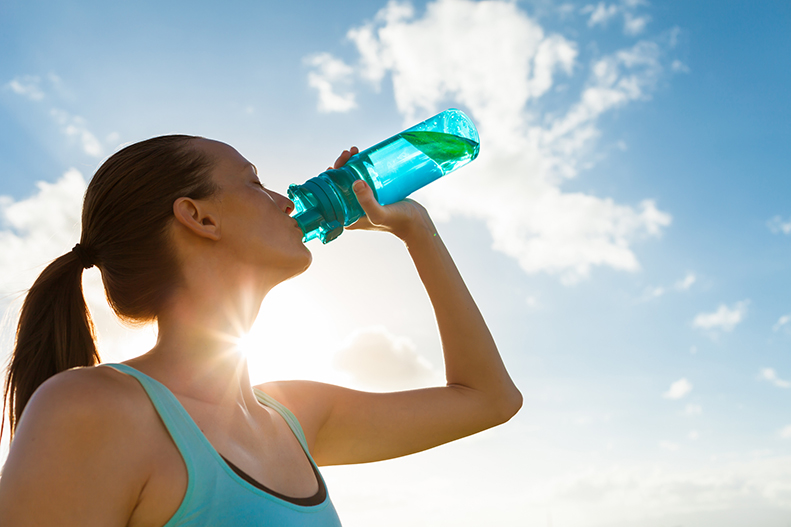 Hydration is fundamental to many physiological processes in and out of sports. With even a loss of 1% in body mass due to dehydration, you can expect your athletic performance to suffer. Dehydration increases core temperatures, speeds up carbohydrate oxidation, and muscle glycogenolysis. This simply means you are going to go through your energy reserves faster than if you were staying hydrated.

Dehydration will also attenuate strength (by ≈2%), power (by ≈3%), and high-intensity endurance (by ∼10%). To make matters even worse athletes who lose as little as 1–2% of their body mass through sweat loss exhibit an increase in heart rate, as well as a decrease in cardiac output, cognitive awareness, anaerobic power, and a decrease in time to exhaustion. Additionally, inadequate replacement of sodium, the predominant electrolyte lost through sweat, is thought to exacerbate the decline of these factors.

There is no one size fits all hydration plan for anyone to address dehydration-associated performance losses. Every athlete has a unique sweat rate and amount of sodium lost through sweating. A tailored hydration plan is what an athlete needs to mitigate the loss of performance due to dehydration.

The simplest way to measure your sweat rate is to weigh in before and directly after activity, and then modify rehydration based on findings. If weight was lost, hydrate more. If weight was gained, hydrate less.

Testing for sodium loss isn’t as straight forward. Tests aren’t something typically done at home. There are some urine strips that can help you understand sodium pre and post-activity but blood tests and the use of the LAQUAtwin Na+ meter are used as a simple test to determine the Sodium ion content of sweat. While an “easyish” method of testing the cost of this meter and others may be prohibitive some athletes.

I subscribe to the slow drip method of hydration which means taking a pull from a sports bottle every 5 minutes. Dehydration can actually blunt your desire to drink so when you do get thirsty when it is hot and you have been active at any level for a while it’s often too late to rehydrate without stopping activity altogether and seeking cooler shelter. I recommend 24 oz an hour of activity to start but your sweat rate and current level of heat acclimation may require more or less. The only way to know for sure is to weigh yourself pre and post-activity.

In a bike or sports, bottle add the following

The appropriate number of drops of Lyte Show electrolyte mix to the size of the bottle you will be using
2 TBSP of either Lemon Juice, Lime Juice or Cherry Juice
1 packet of raw turbinado cane sugar
2 TBSP of Raw Organic Honey
Optional – Pinch of sea salt

This was posted originally on the Positive Performance Coaching website.