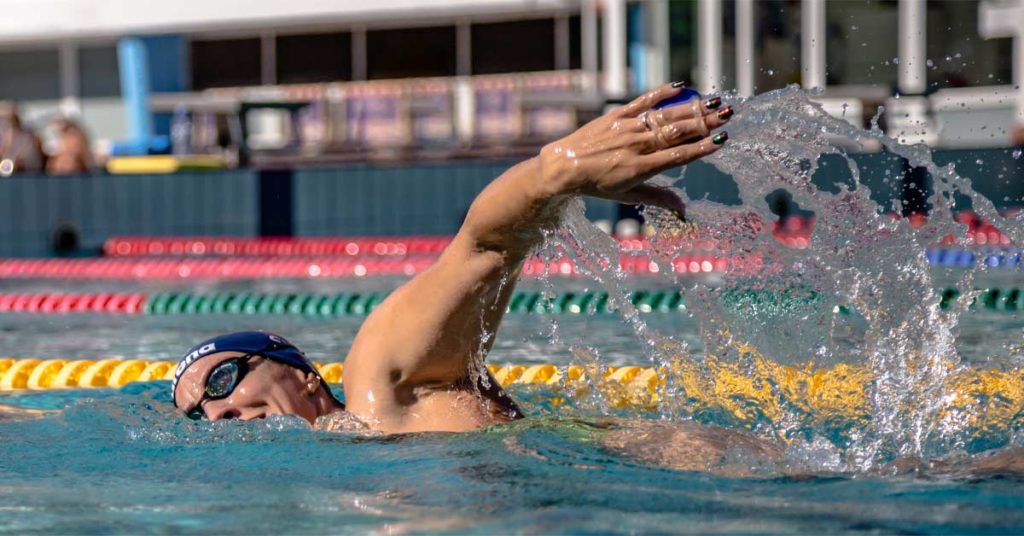 After spending a lifetime in the sport, in 2015 I realized I had many questions about swimming for which very few answers were available.

Looking at the big picture, I thought that myths, beliefs, and traditions weren’t allowing proper development of swimmers, and I was working half-blind trying to improve the athlete’s technique using trial and error. Moreover, the performance of many swimmers was getting worse while I knew for a fact that they were in better shape than ever before.

To help the swimmers progress, I needed to answer the very basic questions that had bothered me for a long time. Therefore, I decided to build a sensor that measures the propulsive force of the hand strokes.

Feel for the Water?

Feel for the water—or hold on the water—are common phrases referring to the swimmer’s ability to gain traction. While it seems to be a natural ability with gifted swimmers, it also can be taught with various drills (at least to some extent). The “feel” is vitally important to swimming success. However, it’s very difficult to explain and impossible to compare without quantifying it somehow. Fortunately, if you can feel the hold, you can also measure it.

A good feel for the water should efficiently generate propulsive force to the swimmer. Essentially, you should know the magnitude, direction, and timing of the force. As examples, the force of the strokes for a distance swimmer and a sprinter are presented in Images 1a and 1b. The figures show force as a function of time from the entry to the end of the push phase.

The stroke of a typical distance swimmer is characterized by a fairly long glide phase, during which all forces are minimal (Image 1a). Force production is maximized at the end of the stroke, and almost all of it should be propulsive (green). Sprinters, on the other hand, need to produce propulsive force right at the beginning of the stroke. Both the propulsive force and the stroke rate should be maximized even at the expense of optimal direction. It’s very common to see sprinters produce a large vertical force (red) at the beginning of their stroke. Even a substantial drop in the force at the end of the stroke is not critical, because the strokes overlap heavily thanks to a high stroke rate.

With SmartPaddle, the feel for the water becomes visible both to the swimmer and the coach. You can identify possible problems in stroke technique and verify the effect of corrective actions. For example, the force graph of a developing swimmer is presented in Image 2. It doesn’t do the swimmer much good if water is pushed in wrong direction (in this case lateral), especially during the strongest part of the stroke. Losing the force at the end of the stroke is also very common with developing swimmers.

What Is the Difference Between a Distance Swimmer and a Sprinter?

As could be seen in Images 1a and 1b, the force graphs for a distance swimmer and a sprinter are quite different. Aside from the athletes’ pure physiological capabilities, a major difference is that swimmers usually master either the sprinting technique or a technique more suitable for longer distances. When swimmers try to apply their technique in the wrong distance, their performance is invariably below their true potential.

In a pool, my daughter was considered a pure sprinter excelling in 50m butterfly—but she couldn’t even finish a 200m distance despite several trials. In track and field, however, she was an adept long-distance runner while her sprinting performance was clearly below average. It was obvious to us that she needed to develop different swimming techniques for each distance to compete in them successfully.

According to our measurements, her greatest asset in sprinting distance was her powerful dolphin kicks. To use them even more efficiently, she needed to increase her stroke rate. She could achieve this by decreasing the force she applied with her hand strokes.

Using a high stroke rate and a powerful kick was not an option, however, if she wanted to finish a 200m race. Unfortunately, decreasing the stroke rate created a problem with a huge drag. But she could overcome this problem by adding a third kick in her stroke. During the third kick, she focused on attaining an extremely streamlined body posture, which made starting the hand stroke very easy. Using this technique not only made her strokes lighter but also decreased the number of strokes by 40%. After swimming the first 150m with the 3-kick technique, she could switch to a 2-kick technique for a very powerful last lap.

Which Is More Important—Pulling or Kicking?

This is really a trick question, as the answer depends on the swimming stroke, the distance, and the individual swimmer. Moreover, to be very successful, the swimmer has to master both. What’s often overlooked, though, is that the kicks can make the pulling much easier. Or haven’t you noticed that, when using fins, your feel for the water improves substantially?

The effect of the kicks is most pronounced in the catch phase when the swimmer’s velocity is at its lowest. Many swimmers pull their hand too fast at the beginning of the stroke and don’t gain much traction. With kicks, the swimmer’s velocity increases during the catch phase, and it’s much easier to get a good hold on the water. Consequently, the effect of the kicks is most important for swimmers who otherwise struggle with their catch phase.

With SmartPaddle, you can easily measure improvement in the hand strokes by conducting the test with and without kicking. According to our measurements, swimmers can produce approximately the same amount of propulsion at a certain stroke rate, regardless of whether they’re kicking (Image 3a). The difference is that with kicking, the strokes are significantly longer, and thus the speed is substantially higher (Image 3b). The effect of the kicks is pronounced at a low stroke rate because the speed variation is also greater.

What Happens After a Few Hundred Meters?

Have you ever wondered why you seem to hit a wall in long-distance swimming? In the beginning, swimming seems easy, and you make good time without much effort. After a few hundred meters, however, your arms seem to go numb, and each stroke is a struggle—even if you’re not particularly winded. Technique drills and video analysis don’t offer much help since these are always done when you’re fresh. That’s not when you experience the problems.

SmartPaddle provides a view of the changes taking place during long-distance swimming. For example, the impulse of each individual right-hand stroke is presented in Image 4 during a 14-lap test. In this case, the propulsive impulse (green bar) in lap 6 (between 40-50 strokes) decreased by half from the original. After that, it remained more or less constant for the rest of the test. Because the right hand was much weaker than the left, the speed of the swimmer always decreased when he pulled with it. As the right hand got weaker, the speed variation increased substantially, and the swimming became even more inefficient.

Image 4. The development of the right-hand impulse in a long-distance freestyle.

The swimmer was instructed to focus only on maintaining the force in his right hand. He also balanced his swimming by adding kicks to help the catch phase of the right-hand stroke. Within a week, the impulse of the right hand increased by 63%.

The swimmer improved his time in a 400m trial by more than 20 seconds while maintaining exactly the same stroke rate. This development was possible once the swimmer became aware of the weakness in his technique.

SmartPaddle is a wearable sensor that measures the force, speed, and orientation of the swimming strokes. SmartPaddle shows whether the swimmer can apply the right amount of force in the right direction at the right time.

The SmartPaddle sensor is attached to the swimmer’s fingers, and the measurement is carried out with a mobile app (Image 5). You use the app in the same way as a regular stopwatch—it recognizes strokes and laps automatically and calculates a detailed analysis of the technique. The feedback is available immediately at the pool deck from the web service. All data is stored in a database for review, comparison, and follow up.

Image 5. Carrying out the measurements with SmartPaddle.

Force graphs presented in Images 1 and 2 give a good overview of the swimmer’s feel for the water. With time-dependent force data, the swimmer can visualize, for example, how the propulsive force varies during the measurement. As I demonstrated previously, variation may be an important source of inefficiency.

In Image 6, you can see that in this test, the right hand produces significantly more propulsion than the left. When the propulsive force is above the average force, the speed of the swimmer increases. Conversely, when propulsive force is below average force, the swimmer decelerates. Therefore, the speed of the swimmer increases during the right-hand stroke and decreases during the left. Thus, the average force provides information on the speed variation, which is one of the major reasons for losses in swimming performance.

The possibility of downloading the time-dependent force data also lets the user combine the force with advanced video analysis tools (Image 7). By creating a force overlay into a video, it’s easy to visualize and observe the propulsive, lateral, and vertical force components. Such a view provides unprecedented clarity to the force measurements.

As a scientist and an engineer, I value empirical testing over beliefs. Coaching still requires us to make educated guesses, but I prefer to base them on hard data. I find the motivation to train increases when the results are clearly visible. The better the swimmer is aware of their strengths and weaknesses, the easier it is to prepare for competitions—and being well prepared is the best source of self-confidence needed for winning.

When I first started testing the SmartPaddle, my daughter’s best swimming stroke was 100m butterfly, where she was ranked 21st in her age group in Finland. In two years, she became the Finnish junior champion in 50m butterfly, reached 2nd position in 100m and 3rd in 200m. She also took several podium positions in medley as well as backstroke. She might have reached that level without testing, but I never trust luck when there is another option.