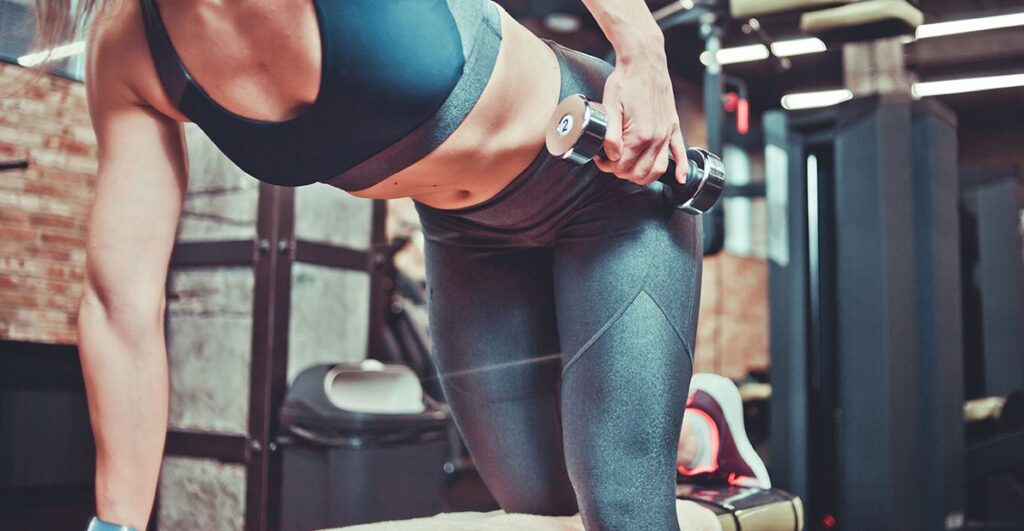 You already know that the order of certain things matters-cleanser before serum, socks before shoes, toaster before avocado mash. Well, when you’re working out in the gym, order matters too.

Plain and simple, the order of your exercise movements is actually one of the defining factors in how effective your workout regimen is, according to strength and conditioning specialist Alena Luciani, M.S., C.S.C.S., founder of Training2xl. Full stop.

If you remember one thing, make it this: Do more technical, harder, full-body movements before the smaller-muscle-focused accessory work, says Chelsea Axe, D.C., C.S.C.S., fitness expert at DrAxe.com.

However, there’s no universally “right” order. “Asking for ‘the best exercise order’ would be like asking a chess master what the best move in chess is-it’s going to vary,” says Dariusz Stankiewicz, C.S.C.S., co-founder of Body Evolved, physical therapy and strength coaching studio in New York City. Touché. (Related: How to Work Out Less and Get Better Results)

That said, it can be daunting to plan your own workout routine if have no idea where to start. These seven rules of exercise order can help.

1. Should you do strength or cardio first?

Should you do cardio before strength training is the million-dollar fitness question. Luciani says the answer comes down to your goals. “If you want to build muscle, you should start with 5 to 12 minutes of low- to moderate-intensity cardio to get your blood flowing.” (That may come in the form of a quick dynamic warm-up or some time on the treadmill or elliptical.) Much more than that could fatigue your muscles too much you want to be fresh before stepping up to the dumbbells or barbell, which is where you’ll build your strength.

Research backs it up: In one study published in The Journal of Strength and Conditioning Research, researchers compared workouts of only strength training, running then strength, and cycling then strength. They found that exercisers did fewer reps if they had just run or cycled. Another study found that when exercisers ran on a treadmill first, they couldn’t do as many reps during strength training and also showed reduced muscle power. So, if strength is your goal: Warm-up, do your strength workout, then finish with longer cardio bouts if you want to bake cardio into the equation.

However, if you’re training for a race or looking to build cardio endurance, start with cardio-just be careful when you get to the weights. “Prolonged steady-state cardio or high-intensity interval training will tax your body, so only lift as much as you can with good form,” says Luciani. Or consider doing your strength workouts on days when you don’t need to log training miles so you can go heavier. (Grab a set of light weights and try these strength exercises every runner should be doing.)

Plyometrics have gotten buzz for their ability to make you explosive and strong. Most experts recommend only doing plyometric movements twice a week. And on the days you do them, do them after warming up but before anything else.

While these moves are a surefire way to make you firmer and faster, they shouldn’t be done under fatigue, says Luciani. “Plyo movements are all about all-out effort with good form. At the end of your workout, traditional plyometric movements simply aren’t going to be as explosive-and therefore as effective as they would at the beginning of your workout.”

What if finishing up your workout with a cardiovascular burn is your jam? Jump wisely. “You could actually get injured if you try anything single-legged or with equipment (think depth jumps, single-leg hops, box jumps, jumping box step-ups, etc.) when you’re already tired,” says Luciani. Her suggestion? Keep it to squat jumps and burpees, and stop when your form gets wonky.

3. Do multi-joint before single-joint.

If you really want to reap the benefits of strength training, multi-joint-also called “compound”-exercises are where it’s at. Compound exercises like the back squat, deadlift, and push press are movements that work multiple joints (ex: your knees, hips, and shoulders) and thus multiple muscle groups at the same time, says Luciani. “They improve full-body strength, elevate the heart rate quickly, and improve coordination and balance too,” explains Luciani.

But here’s the thing: Compound exercises usually require more technique than an exercise that only works one muscle group, which means you want to be as fresh as possible when doing them. That’s why experts-including Luciani and Tony Carvajal, certified CrossFit trainers with RSP Nutrition-recommend doing compound movements first.

Research confirms their recs: One study found that when a group of untrained men did strength work, they saw greater improvements in the moves they did at the beginning vs. those performed toward the end. Axe says can this info can be applied to female exercisers too. (BTW, here’s why more women are trying to gain weight through diet and exercise.)

Then, you can move on to single-joint movements: “Single-joint and single-muscle exercises can usually still be performed well under fatigue, but the opposite isn’t usually true,” says Carvajal. (Think: Barbell back squat then leg extension machine.)

The risk of performing compound movements under fatigue is two-fold, says Luciani. “If you do compound movements when you’re super fatigued, there will be a lapse in technique, which reduces the effectiveness of that exercise for building muscle and teaching safe movement patterns, plus increases your risk of injury.” Yikes.

If you’re just doing bodyweight movements in your workout, you might think order doesn’t matter. But it does-especially if you’re a gym newbie. “Use the same principle as above: Do the exercises that require the most energy first,” says Luciani. Think about it this way: Which takes more energy, a push-up or a calf raise? A push-up. Which takes more energy, a crunch, or an air squat? An air squat. A pull-up or a glute bridge? A pull-up.

If you’re a seasoned exerciser, the risk of injury during bodyweight movements is low, regardless of the order of exercise. “But people who are just learning full-body movements like the push-up or air squats should do those movements first so that they’re able to preserve form and reap all the muscle-building benefits,” says Luciani.

What if you’re doing a circuit (ex: this 30-minute circuit workout), where you’re doing a variety of moves in succession? Good news: If you can safely perform 15 to 20 reps of all the bodyweight movements in the circuit, you can just go at it. (Related: Here’s the Difference Between Circuit Training and Interval Training)

If you’ve ever taken a boot camp or HIIT-style class, you’ve probably done a circuit that includes weights. That’s okay, too. Just don’t let your ego get in the way, says Luciani. Pick a weight you can safely use to perform 15 to 20 reps. (For more info on circuit training, find out how to build the perfect circuit training workout.)

Many people organize their workout routines based on certain muscle groups. For example, back and shoulders on Monday, chest, and triceps on Tuesday, etc. The idea is that this split combines different movement patterns to help you effectively increase muscle growth while reducing the risk of injury. However, if you’re doing the same workout every time you hit the gym for leg day, you’re doing it wrong-you should be varying the order of your exercises, says Luciani.

Why? Research shows that people can do more repetitions of the first strength exercise performed than all the other movements in that circuit or sequence. So, for example, “if you always do your push exercises (i.e., chest press) before your pull exercises (i.e., dumbbell row), your pulling muscles won’t get as strong as the pushing muscles!” says Luciani.

Her recommendation is simple: Alternate! And if you just want someone else to do the programming for you, try this four-week strength training plan for women.

There’s a reason you usually finish classes torching your core: Core circuits should be done at the end of the workout, according to Luciani. “Remember compound movements and full-body moves like the push-up are going to work your core even more than a crunch or plank does. You don’t want to go into those with your core already taxed.”

Looking for an ab finisher routine? Try this 10-minute workout designed to exhaust your abs or these four oblique exercises.

Remember: It can be tempting to throw a workout together like ingredients in a blender. But to get the most out of your time at the gym, spend a little extra time planning out the order that you’re going to do your exercises. When in doubt, Luciani says there’s one main rule: “Exercises that use the most energy and muscle groups should be done first.”

Authored By:
Gabrielle Kassel
originally published on the Shape.com website, originally on January 31, 2019