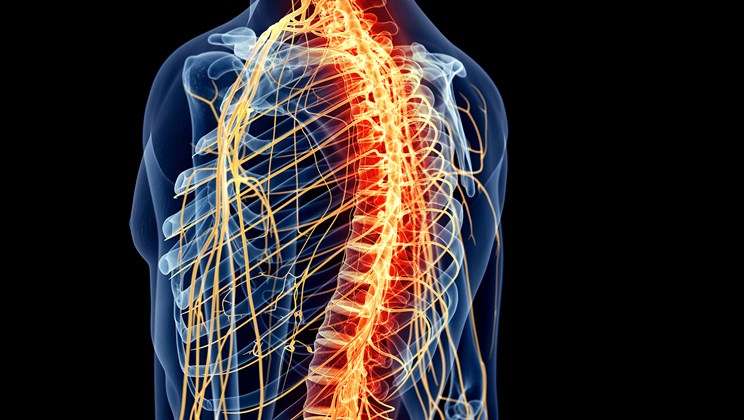 Fatigue is one of the most poorly understood concepts in the fitness industry. There is a pervasive tendency to consider fatigue as a sensation. In fact, fatigue is merely a reduction in the ability of muscles to exert force during exercise. It is accompanied by feelings of effort and discomfort, but the fatigue itself is separate from these sensations.

Fatigue is caused by multiple processes that can occur inside the central nervous system (CNS) and inside muscles. Whenever fatiguing processes occur inside the CNS during a bout of exercise, high levels of motor unit recruitment cannot be achieved. This is known as CNS fatigue.

What is CNS fatigue?

CNS fatigue is defined as a reduction in our ability to voluntarily activate a muscle in a maximal effort. This reduction in voluntary force necessarily requires either a decrease in motor unit recruitment levels, a reduction in motor unit firing rates, or both. Either change will lead to a reduction in mechanical tension experienced by the muscle fibers of high-threshold motor units because the size principle is always followed.

Importantly, CNS fatigue can occur during both submaximal and maximal contractions, and the underlying mechanisms are quite similar in each case, (although their proportional contribution to CNS fatigue might well differ). Indeed, contrary to popular belief, it is unnecessary to exert high forces or achieve high levels of muscle activation to produce CNS fatigue. In fact, CNS fatigue occurs readily when performing extended durations of exercise that involve very low forces, including aerobic activity. As we will see, this point is particularly important for understanding how CNS fatigue affects strength training practices.

Why is CNS fatigue important?

When CNS fatigue occurs, voluntary activation is reduced. This means that either the number of motor units that are recruited decreases or their firing rates decrease.

Since motor units are always recruited in size order, this means that the highest threshold motor units (which control the largest numbers of the most highly-responsive fibers) are derecruited, or their firing rates are reduced. Consequently, when CNS fatigue occurs, these important muscle fibers are stimulated to a lesser extent (or even not at all) after a workout. This means that less muscle growth will be stimulated.

Importantly, the failure to achieve maximal levels of motor unit recruitment occurs even when we train to muscular failure. This is because “muscular” failure is actually caused by both CNS fatigue and local, muscular fatigue.

What is afferent feedback?

Afferent feedback is one of the mechanisms that could lead to CNS fatigue during strength training. Indeed, group III and IV afferent signaling from a trained muscle does seem to reduce voluntary activation, likely by increasing inhibitory input to the motor neurons. Afferent nerves can influence both spinal and supraspinal neurons, so such signaling could cause CNS fatigue with or without affecting the size of the initial signal from the motor cortex.

The firing of group III and IV afferent neurons seems to be a normal response to all muscular contractions, even those involving very low levels of effort. Yet, by direct measurement of neuron firing, several studies have found that group III and IV afferent nerve signaling is increased by blood flow restriction, likely due to the greater stimulation of metabolite-sensitive afferent nerves, because of the faster rate of metabolite accumulation that occurs when muscle oxygenation is reduced. Also, injecting potassium, lactic acid, and arachidonic acid into a muscle activates group III and IV afferents and also causes muscle pain and the sensation of muscle fatigue. Even so, several studies have shown that aerobic exercise involving low external forces is a very effective form of exercise for triggering CNS fatigue, so it may be that the duration of time that the muscle produces afferent feedback is more important than the level of afferent feedback itself.

Does CNS fatigue happen during and immediately after a set of strength training?

If this were true, what would it mean in practice?

Contradicting the first claim, there is good evidence that CNS fatigue occurs immediately after a workout of fatiguing contractions. Such reductions in voluntary activation can last for up to 30 minutes. This prolonged suppression of motor unit recruitment levels may help us to explain why short rest periods are less effective for muscle growth than longer rest periods, as taking a short rest period involves training while still experiencing CNS fatigue from the previous set.

Therefore, we can conclude that CNS fatigue develops throughout sustained isometric and dynamic contractions, in addition to after a set of muscular contractions, and it can last for up to 30 minutes. This CNS fatigue likely explains why short rest periods are less effective for hypertrophy than longer rest periods, and likely also explains why very light load strength training to failure does not work as well as strength training with heavier loads.

Does CNS fatigue really accumulate over a strength training workout?

Firstly, it implies that there is a diminishing effect of adding extra volume for a muscle group to a workout. Each incremental set will have a progressively smaller and smaller effect, due to the increasing level of CNS fatigue. Even so, the research into the dose-response of training volume on muscle growth is currently somewhat unclear, due to the publication of some studies showing the increased effectiveness of quite high volumes.

Secondly, it implies that exercises that are performed later in a workout will produce smaller effects than those performed earlier in the same workout. This effect has been observed consistently to date.

Therefore, it is the proximity to muscular failure that determines the level of mechanical tension on each working muscle fiber, and not the magnitude of the external load. Consequently, when training to muscular failure, the level of mechanical tension experienced by the working muscle fibers is the same regardless of the weight on the bar.

Therefore, we can conclude that CNS fatigue develops to a greater degree when performing strength training sets of longer durations, such as are required when using lighter loads. This CNS fatigue likely explains why very light loads are less effective for hypertrophy than light, moderate, and heavy loads. The lack of any obvious difference in muscle growth between light, moderate, and heavy loads suggests that the effect may be non-linear. CNS fatigue may increase exponentially when load (rep range, in reality) is reduced below a certain threshold (likely between 20–40% of 1RM).

It is worth noting that long-term studies that have assessed the effects of light load strength training (often in conjunction with blood flow restriction, although this is not really relevant) have reported no increases in voluntary activation, which suggests that there is no stimulus to increase the number of recruited motor units during that type of exercise. If peripheral fatigue during light load strength training did indeed cause a gradual increase in motor unit recruitment all the way through to maximal levels, then we would naturally expect this stimulus to lead to an adaptation in voluntary activation levels. Since this does not happen, we might reasonably infer that motor unit recruitment levels are never truly maximal during light load strength training.

What are the practical implications?

Understanding how and why CNS fatigue occurs in a workout is important for writing any training program intended to cause hypertrophy, because it can affect the rest period duration, exercise order, relative load, and volume that we select.

Additionally, due to its responsiveness to the presence of muscle damage, CNS fatigue affects training frequency and the use of aerobic exercise in the same training program as strength training (concurrent training).

To mitigate the effects of CNS fatigue, we can use longer rest periods between sets and prioritize the most important exercises by placing them first in a workout, because CNS fatigue will occur after each set in the workout, and it will accumulate gradually with each additional set. We can use moderate and heavy loads since these involve performing fewer total reps to achieve the same hypertrophic stimulus as light loads. Finally, we can be aware that simply adding extra volume to a single workout may not necessarily produce incrementally superior effects, and dividing a single workout into more frequent workouts over the week may sometimes lead to better results.

What is the takeaway?

Fatigue during strength training involves a reduction in our ability to exert voluntary force. This reduction in voluntary force occurs due to fatiguing processes within both the CNS and also within the muscle. When fatigue occurs due to CNS fatigue, this suppresses the level of motor unit recruitment that can be achieved, which in turn stops large numbers of highly-responsive muscle fibers from being trained during the set.

CNS fatigue accumulates during sets of strength training, which prevents full motor unit recruitment from being reached despite reaching muscular failure. This seems to occur to a greater extent when the duration of a bout of exercise is greater, possibly due to the greater time that the muscles spend producing afferent feedback. This can explain why very light loads are less effective than light, moderate, and heavy loads for producing muscle growth.

CNS fatigue lasts for several minutes after each set of strength training and accumulates over a workout. This can explain why short rest periods are less effective than long rest periods for producing muscle growth. It can also explain why exercises that are done earlier in a workout lead to more muscle growth than those that are done later, and why increasing training volume does not seem to have a linear dose-response effect on hypertrophy.