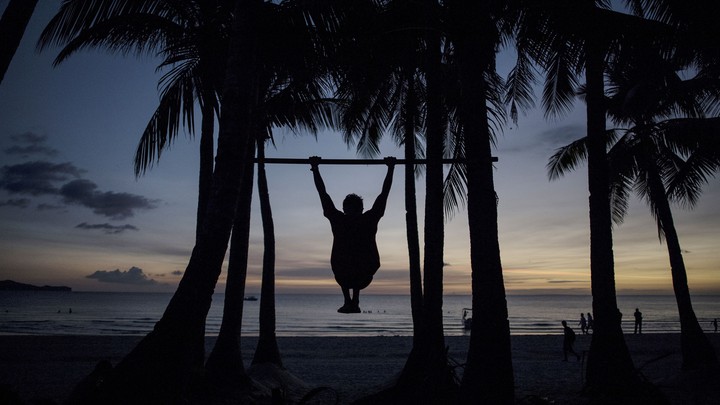 Have you ever tried to grease the groove?

A few years ago, haunted by vague memories of being a weak middle-schooler, Brett McKay decided he wanted to be able to do more pull-ups. McKay, who runs the website and podcast The Art of Manliness,  had in the past tried doing a traditional, twice-weekly regimen, gradually building up his reps. But this time, he turned to a training technique from Pavel Tsatsouline, a former Soviet trainer who is credited with getting Americans into kettlebells, the rounded weights with handles for swinging or lifting.

After reading a book by Tsatsouline, McKay decided he needed a radical approach to his fitness routine. He needed to grease the groove.

Greasing the groove, as Tsatsouline explains it, means not working your muscles to the point of failure. A common idea in weightlifting is that you should lift until you can’t do another rep, purposely damaging muscle tissues so they grow back bigger. But muscle failure, Tsatsouline writes in his 1999 book, Power to the People! Russian Strength Training Secrets for Every American, “is more than unnecessary—it is counterproductive!”

Instead, Tsatsouline advocates lifting weights for no more than five repetitions, resting for a bit between sets and reps, and not doing too many sets. For a runner, this would be like going for a four-mile jog, but taking a break to drink water and stretch every mile. Tsatsouline’s book suggests spending 20 minutes at the gym, tops, five days a week. In this way, he claims, you grease the neurological “groove,” or pathway, between your brain and the exercises your body performs. It’s not exactly the brutal routine you’d expect from someone billed as a Soviet weightlifter. But Tsatsouline contends this is the most effective way to build strength.

Over time, greasing the groove has trickled down through the fitness realm, with each lifter and CrossFit champ who practices it slightly changing its meaning. In The Complete Guide to Bodyweight Training, the sports therapist Kesh Patel defines it as lifting weights in “smaller, but frequent chunks, rather than one large one.” On Instagram, people tag everything from yoga poses to 100-pound deadlifts with #greasethegroove. (The term is, helpfully, both sciencey and sexy sounding.)

“I can’t say for certain why it has gained popularity,” said Christopher J. Lundstrom, a professor of exercise science at the University of Minnesota, in an email, “but I suspect it has to do with the simplicity of the idea, and the fact that it does not require a particularly hard effort (i.e., it doesn’t hurt) and often requires little to no equipment.”

In fact, greasing the groove has become something of a catchphrase for people who don’t have the time or ability to do a full workout, but still want to squeeze in a little exercise. “Some days your daily routine is better than others but the key is consistency and #greasingthegroove,” one yogi’s Instagram caption says. The practice appears to have taken on a Michael Pollan–esque definition: Lift weight, not too much, most of the days. For busy people who just want to squeeze in fitness however they can, that might be just the right mantra.

One way to grease the groove is to just do the exercise whenever you think of it. Ben Greenfield, in Beyond Training, describes how he would do three to five pull-ups every time he walked under a pull-up bar installed in his office doorway. By the end of the day, he’d have performed 30 to 50 pull-ups with minimal effort.

McKay opted for something similar: He set up a pull-up bar in his door frame, and every time he walked under it, he would do one. “You’re allowing yourself to practice more without going to fatigue,” he says. “If you’re constantly thrashing your body, doing max sets every time you do a pull-up, you’re gonna have a bad time.” Anyone who has tried to climb the stairs to their apartment on achy quads after an ambitious leg day knows the risks of overexertion. Within a month, McKay says, he went from being able to do about five pull-ups to about 15.

Kevin Weaver, a professor of physical therapy at New York University, told me that training by greasing the groove can help your body increase the number of muscle fibers it uses to perform a certain action. Brad Schoenfeld, an associate professor of exercise science at CUNY’s Lehman College, also sees a potential benefit. Because of how the brain learns, he says, doing four sets of an exercise over five days rather than 20 sets in one day, for instance, might be a way to improve technique or form, which could result in getting stronger even if you don’t add additional weight. This would be especially helpful for more complex exercises, like certain kettlebell moves.

Schoenfeld cautions that a deliberately patient approach to lifting is not the same as “just doing a pull-up now and then,” though. As with most of life’s good, easy things, there’s not much evidence that haphazardly greasing your groove will make you much stronger. While lifting lighter weights for more repetitions can increase strength and muscle-building, strength improvements are still slightly better if you lift heavier weights, says Mike Roberts, an associate professor at Auburn University’s School of Kinesiology. He recommends switching up your workout regimen so that occasionally you perform workouts with heavy loads and separate workouts with light loads. And contra Tsatsouline, he says performing the exercises to the point of exertion is what’s most important.

Greasing the groove, in other words, might not actually be a secret Spetsnaz shortcut to getting ripped. But the loose way many people are interpreting the practice—try to get stronger in small bursts, whenever the opportunity presents—could offer something more valuable. Ria Heaton, a stay-at-home mom, started greasing the groove in the last year to increase the number of pull-ups she could do. Within about a month, she went from one to five—not as many as the most hardcore gym rats, maybe, but still a high number for a woman. Heaton’s explanation for why greasing the groove works is simpler than muscle fibers or perfecting technique. “The more you practice something, even a little bit at a time, the better you become at it,” she told me via email.

This more relaxed “greasing the groove light”—call it “spritzing the groove with Pam”—might still be a strategy for people who want to get stronger, but don’t have the time to get swole. In the approach’s slow simplicity, it could be a more sustainable way to exercise. Though it’s almost certainly not what Tsatsouline intended, doing whatever physical activity you can whenever it’s convenient is still a decent way to burn a few calories and feel less sedentary. An exercise strategy intended for Navy SEALs is actually perfect for everyday cubicle dwellers.

I, for instance, have been told I should lift weights. Every time I plummet out of crow pose in a yoga class, my teacher says I need to work on my upper body strength. (Well, that and “be less afraid,” which there’s no workout for.) Such admonitions would have motivated me in high school when I would cut out weight exercises from Seventeen magazine and peer down at them while I grunted away in my town’s tiny community-college gym. But these days, life has eclipsed my desire for abs. I’m happy if I can drag my increasingly jiggly butt to the elliptical before 9 p.m. on a weeknight. Realistically, the only way I would have time for upper-body work is by doing the occasional push-up between folding the laundry, sending that email, making that phone call, and chopping up that stuff for the slow cooker.

The bodybuilders out there might criticize this softer way of greasing the groove as lazy or ineffective. But in a way, it fits with a broader cultural trend of embracing imperfection and simply trying one’s best. Americans’ stressed-out lives have given rise to a new philosophy in which we are, essentially, encouraged to admit defeat on certain things (spotless kitchens, impeccable pecs, and so forth). Our schedules won’t ease up on us, the thinking goes, so maybe we should ease up on ourselves.

If you wake up in the middle of the night and are stressed because you can’t fall back asleep, you’re supposed to tell yourself that’s fine; you’ll fall asleep eventually. Similarly, if you can’t lift a ton of weights, maybe that’s fine, too. You’ll lift them gradually.

OLGA KHAZAN is a staff writer at The Atlantic and the author of Weird: The Power of Being an Outsider in an Insider World.

This article was published in the Atlantic